It came as a sad realisation to members of Families and Friends for Drug Law Reform that there was no public focus of the worth of the many, many who have died from the use of illicit drugs and who remain loved as friends and family members. A memorial would help break a silence of prejudice and ignorance which has left many to bear their grief in an isolation tinged with shame. There was anger too: anger at the lack of help, at the pressures on us to abandon those we loved. There were also strong feelings that the death of most if not all those for whom we mourn today should have been avoided. They met their death not so much from any inherent danger of the drugs involved but from policies and practices that shrouded the composition of the drug and forced on many the life of an outcast.

The concept of Memorial and a Remembrance Ceremony was that of FFDLR member Bronwyn Barnard.
Her speech for the Remembrance, Dedication and Plaque Unveiling Ceremony on 16 Dec 1996 can be found here.

The locust tree (Robinia pseudoacacia) under which we gathered on 16 December 1996 was chosen because of its particular associations for the family of one of our members whose brother died earlier that year. The tree then was bare. Its thorns stood out against the winter sky. Spring brought new growth and the green that now shelters us. It also brought a cascade of white blossoms the last of which fell only a few weeks prior to the ceremony. 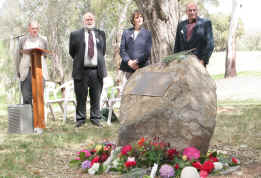 The plaque and stone of the memorial will stand watch by the tree during the coming winter. While the tree is in blossom in September and October next year we plan to hold another ceremony. We would like that occasion to be a celebration of the end of deaths from illicit drugs – the most fitting memorial of those we remember today.

“…The blossoms are blossoming without you…”

“You have gone from earth,
Gone even from the meaning of a name;
Yet something’s there, yet something forms its lips
And hits and cries against the ports of space,
Beating their sides to make its fury heard.

If I could find an answer, could only find
Your meaning, or could say why you were here
Who now are gone, what purpose gave you breath
Or seized it back, might I not hear your voice?”

Permission by the publishers, HarperCollins to print part of Kenneth Slessor’s poem is gratefully acknowledged.